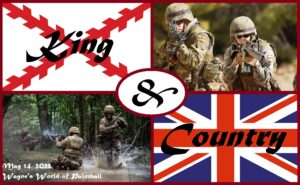 Welcome to King & Country, a unique Florida milsim experience set in an alternate history in which the New World colonies never achieved independence from Europe. It is the early 21st century, and the militaries of the British Empire, and the Kingdoms of Spain and France still fight for control of the colonies, and to preserve the steady flow of trade and riches from the New World.

If the setting is well received, we hope this may be the first of a new series of alternate history milism events exploring a unique take of the history of Florida and the Caribbean.

For centuries, the colonies of the New World have been cornerstones to the great empires of Europe. They are a source of mineral wealth and abundant agriculture to ship back across the Atlantic. Fine universities have been established in the colonies, providing a strong base of science and technology. Skilled craftsman design wonders of artistry, while the factories of the Americas drive industry and critical goods back to Europe. The power and prestige of the European courts are heavily reliant upon their colonies.

The colonies of the New World are dominated by Spain in the south and far west, England to the north, and France even further to the north and into the central continent. The Caribbean and Gulf of Mexico have remained a contested region for centuries. While Spain controls the gulf and maintains the largest number of Caribbean colonies, the English and French maintain a sizable presence across the islands. Even the Netherlands and Portugal hold a limited colonial presence, although they largely try to stay out of the sporadic conflicts in the region and focus on trade. In addition to the warring colonial powers, piracy threatens the shipping lanes and coastal ports. Deserters, criminals, or those unwilling to earn an honest wage under the crown have been known to join these ruthless crews marauding the Caribbean aboard captured military vessels or armed cargo ships.

The Spanish colony of San Marcos occupies a strategic location in the eastern Caribbean. Considered one of the “gateway” islands, it is a popular port for refueling and resupplying vessels preparing for the Atlantic crossing. It is part of a communications relay chain in the region, facilitating broadcasts between colonies and to ships at sea. It is currently ruled by Don Monzon, Governor of San Marcos and Viceroy of Navarra. Bolstered by his private guard and a regiment of infantry from Navarra, he protects the port, communications post, and key overland routes for trade, taxes, and riches minded from the San Marcos highlands. Don Monzon has occupied his post in San Marcos for three years of relative calm. But that is about to change with the landing of Royal Marines on the northside of the island.

We're sorry, but all tickets sales have ended because the event is expired.


Wayne’s World of Paintball is an exceptional scenario paintball field in Central Florida and a regular host of MGP events for over 14 years. Remember that magazines must be removed from weapons except for on the field and the designated chrono area. Approved eye-protection must be worn on the field at all times.

Camping IS available near the parking areas. Be sure to contact the field in advance if you plan to arrive after about 5pm or the gates will be locked.

Air tank refills for HPA weapons ARE available in the pro-shop, which typically opens at 9am. If you require air to chrono or if the game has an early start option, you may want to get your tanks filled prior to game day.